Seville was the capital of the Almohad Empire of Al-Andalus. Its wide range of artistic, cultural, leisure, social and tourist attractions makes it one of the most universal, best known and most visited cities in the world, as well as the cradle of many authors, painters and artists in general. 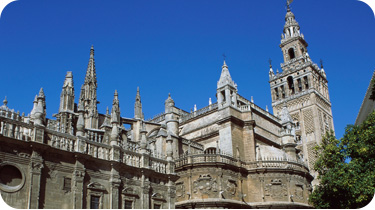 La Giralda was built during the Almohad reign. It was originally the minaret of the Mosque and is now used as the tower of the cathedral. The bottom two thirds of the tower correspond to the minaret of the old mosque, from the Almohad period, while the top third is a construction superposed in the Christian era to house the bells. At the top, you can find the “Giraldillo”, a statue used as a weather vane and that ended up giving its name to the entire tower. World Heritage Site. 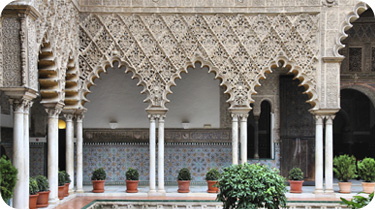 The Alcazar is the oldest active royal palace in Europe. Its construction began in the High Middle Ages. Throughout history, different styles were used in its construction, ranging from the Islamic style of its first dwellers, to the Moorish and Gothic styles of the period after the city was conquered by Castilian troops. Successive works added elements from the Renaissance and Baroque styles. It started to be used as a home for Arab leaders and it is currently inhabited by the King and Queen of Spain when they visit Seville. World Heritage Site. 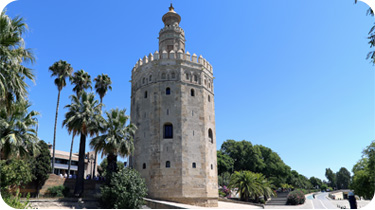 Once part of the wall of the city, La Torre del Oro is the oldest Muslim monument in Seville. It is 36-m tall. Its name in Arabic was probably Bury al-dahab, Borg al-Azahar or Borg-al-Azajal, as a reference to its golden shine, which was reflected on the river. During restoration works in 2005, it was found that this shine, which once was attributed to a coating of tiles, was due to a mixture of pressed straw and lime mortar. 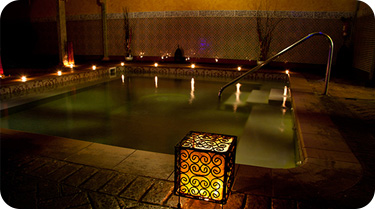 Immerse yourself in the pleasures offered by Arab baths. Enjoy rooms recreated in the image of an ancient atmosphere and begin to discover the benefits they can offer you. Enjoy a tempting treat to your body and soul.