The tourism industry is one of the most dynamic in the world. It currently represents 9.8% of world GDP, almost 7.6 trillion dollars, 6% of worldwide exports and 10% of employment on record. Within this huge market, Halal tourism is growing so fast. In 2016, Muslims spent 169 billion dollars in tourism, which represents an increase of 11,8% over the previous year and a expenditure higher than that made by US tourists (153 billion), German (114 billion) and British (83 billion) that same year.

Muslim Population Expenditure in Tourism in 2016 ($US Bn)

Among those Muslims who spent the largest amounts of money in 2016, we can mention Saudis, Emiratis and Qataris, who spent 20.4, 15.8 and 12.4 million dollars, respectively, closely followed by Indonesians and Kuwaitis, whose expenditure exceeded 9 billion dollars.

Expenditure in Halal Tourism by Country in 2016 ($US Bn)

An expanding market with a promising future. Dynamic Islamic economies, with a growth exceeding the world average, emerging Muslim middle classes, with a higher purchasing power and Western consumption patterns, and a growing Muslim population, currently close to 1.6 billion, guarantee the growth of this market. Expenditure on Halal tourism is expected to reach 283 billion dollars in 2022 and represents 14% of world tourism spending. 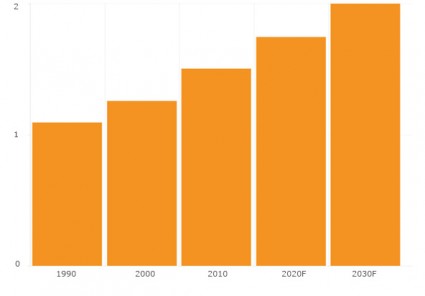